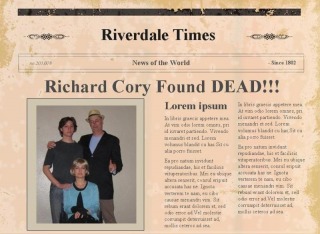 Thoroughly enjoyed last evening's opening night performance. A talented cast, an interesting plot line, a good message portrayed with humor, all made for a great night out!

A thought-provoking play with a fine cast. I really enjoyed the staging too with all the townspeople listening in on everything that is going on just as they do in real life. I don't know why Richard Cory killed himself as we never know why anyone chooses such a violent act.

well done,great enthusiasim from all the cast, very enjoyable and thought provoking.

Bravo to the Director and the cast! I enjoyed the production very much and thought it was very professional, it held my attention every minute. I will not miss your next production.

Great Show. Great cast, set, costumes & music.  Really excellent entertainment. Had not had such an enjoyable evening out in a long time.  Keep me posted for your next presentation.

I had the privileged of watching the play five times. I enjoyed it so much I can watch it ten more times without getting tired of it.
The cast is superb, the music is very good,the director is brilliant. The play is excellent.

Specific Comments Posted on why Richard Cory Kills himself 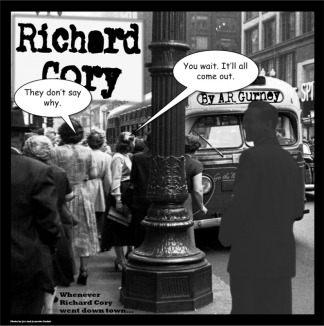 Why did Richard Cory kill himself? It wasn’t the bad joke or any one of the big three (Bad Health, No Money, Too Much Sex) that prompted the suicide. He had everything but had no purpose in life – something that can’t be said about the cast of the play. These actors/actresses put their heart and soul into the show and the result was stunning. Scenes changed seamlessly, the play proceeded an in an uninterrupted manner and the whole thing, from the tiniest detail of the props to the delivery of important monologues or dialogues, was simply flawless. One can only praise the dedication of the cast that gave a beautiful performance resulting in a totally enjoyable experience for its audience.

Anait said it perfectly, except in one regard. Richard Cory did have a purpose in life.
Richard Cory was so good, so perfect that he made all the others uncomfortable near him. Joe, the Newspaper Guy, felt shame by him. The Doctor could not understand his concern over imperfect health. Reverend Davis was scolded by him for not taking the quote of the Eye of the Needle seriously.
Richard Cory's goal was to have a rapport with the common man. In that he failed completely. And when he found he could not return to his former life, he kills himself.